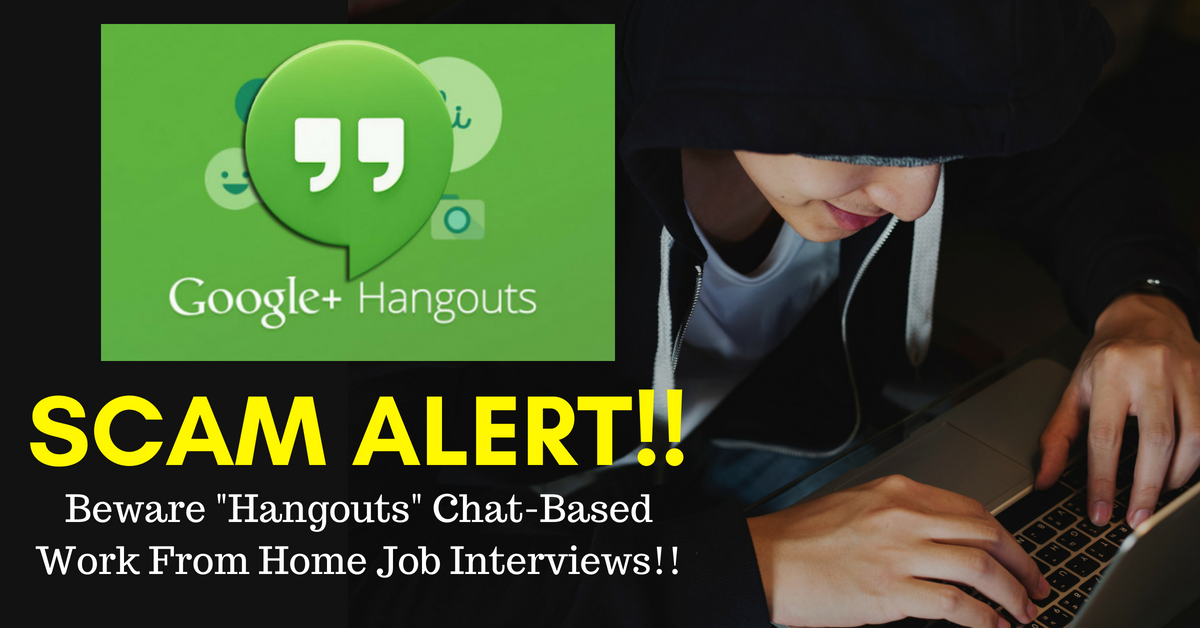 PLEASE DO NOT EVER FALL FOR THIS TYPE OF SCAM!


BIG CORPORATIONS ARE NOT DOING CHAT ONLY INTERVIEWING VIA GOOGLE HANGOUTS!

I am re-posting this because there are a whole new bunch of scammers using this ploy to bait people in. Please read this carefully! Learning how scammers do their dirty deeds is your best defense!

I was contacted today by one of our regular visitors who wanted to know if the job interview she just had with  a big name company was real or a scam. Unfortunately, one glance told me it was a SCAM – one I’d seen before.

Remember my “Interview With a Scampire” saga? If you missed it, you really should read the transcripts of my chat conversations with the scammers. It’s informative and fun. (I may have played with them just a “little bit.”)

You can read all four parts at the links below:

This scam works so well, that it’s being used by many scammers – each pretending to be hiring for a well-known company. While they change the name of the company, the scam is always the same.  No coincidence, since most of the scammers come from the same area. Indeed, it could be the same people, or friends, or relatives with whom they have shared their recipe for scam success.

I’ll say it again… PLEASE DO NOT EVER FALL FOR THIS TYPE OF SCAM!


BIG CORPORATIONS ARE NOT DOING CHAT ONLY INTERVIEWING VIA GOOGLE HANGOUTS!

Yes, some companies will conduct video interviews via Skype or Hangouts, but not straight up chat interviews.

So, why do scammers use CHAT?

There are a number of reasons, but generally speaking the top reasons are:

BE SAFE, dear Rebels! If it seems “off” it probably is!