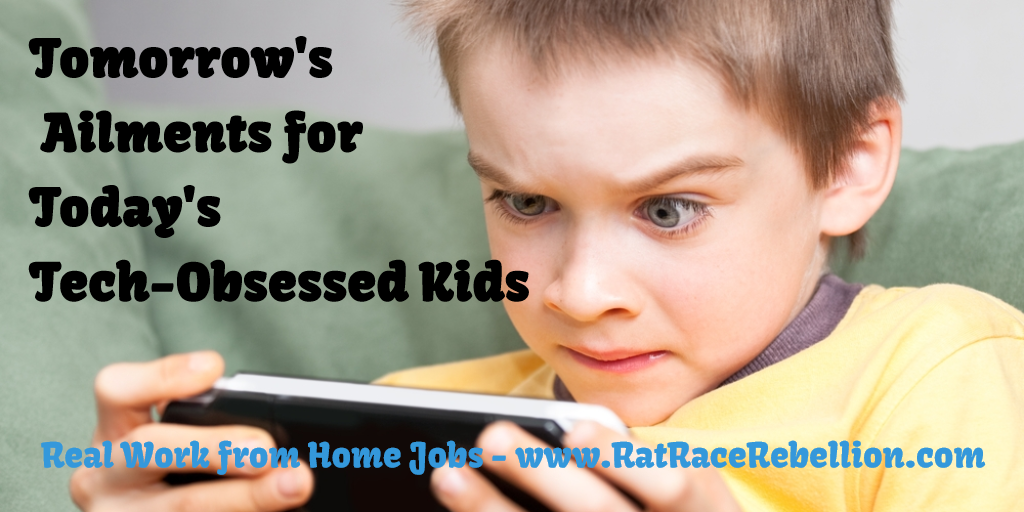 As the mother of two grown children, it’s easy for me to sit back and observe how other people raise their children “these days”. I try to look with a non-judgmental eye, after all, nobody ever said anything to me when I fed my daughter nothing but creamed corn for two weeks because all other foods were “too ugly.”

That said, even the most casual observer can see how the plugged-in child of today spends many waking hours obsessively thumbing tiny keyboards, swinging Wii controllers and mousing spasmodically over screens large and small, almost always indoors.

Factor in assorted trends in parenting and the public schools, and voila! You have the afflictions, complexes, maladies and syndromes of the adults of tomorrow.

Here’s a sampling of what we can expect:

Twitchadigitosis: The involuntary and uncontrollable twitching of fingers and thumbs from excessive texting and computer keyboard use.

Relaxtose Intolerant: The inability to relax without accompanying visual or auditory entertainment. Caused by parents who have habitually used music, video or other programming to “baby-sit” the child.

Quasimosis: Characterized by a pronounced stooping of the spinal column, produced by years of pulling, carrying and holding heavy school backpacks and looking down at the screens of their keyboards and other hand-held electronic devices.

Acute Liarrhea: An unstoppable torrent of thin lies and loose fabrications. Liarrhea manifests in adults who, due to overprotective parents, were never permitted to experience normal childhood adventures.

Egoholism: An illness produced by sustained exposure to “everyone’s a winner!” environments. Symptoms include excessive bragging, eggshell narcissism, the inability to accept constructive criticism, and acute resentment toward those who outperform the egoholic.

Chronic Lamentia: Psychological disorder characterized by incessant keening and wailing over something that never would have been the lamenter’s to begin with. In school, this would include not making the varsity basketball team (the lamenter was too short), not making the cheerleading squad (the lamenter wasn’t bouncy enough), or not being liked by anyone (the lamenter was a bully).
Common among adults raised by parents who complained that everyone and everything (except their child) was responsible for the shortcomings that everyone else knew their child possessed.

STD or Standardized Testing Disorder: Symptoms include the requirement that all questions in life be answerable by multiple choice. Other symptoms include an inability to improvise, paralysis by analysis and an overpowering desire for rote memorization. The incubation period typically lasts until college is completed, at which point the individual is overcome with incompetence.

Femurrhoids: (This is a non-tech ailment that still warrants mention.) A painful inflammation of the flesh covering the femur or thigh. Afflicts men who, in their youth, wore low-slung trousers that required a constant outward pushing of the thighs to keep the pants off the ground.

Molexia: Aversion to natural light. Manifests in adults who spent their childhoods crouched over gadgets indoors.

We’d love your thoughts and any ailments you foresee in the future. Drop us a note in the COMMENTS section below!  😉

30+ Sites to Sell Your Things for Extra Cash